Enjoy this traditional story telling the legend of a bride who was captured from Mosta by sea pirates.

Right in the corner where Torri Cumbo Road and Dumblat Road cross each other in Mosta, there is to the present day the building known as Cumbo Tower. In fact, one of these roads derives its name from this tower.

This building was constructed in the Middle Ages. It is surrounded by gardens leading up to the Ta’ Qali area, and inside it one can find a water reservoir which gets its water from an underground canal.

However, this tower is mostly renowned for its links with one of the most famous legends of Malta, which recounts the story of the Mosta Bride. The folk song and the legend regarding this story are very old, and most children in these islands learn about them at primary school. 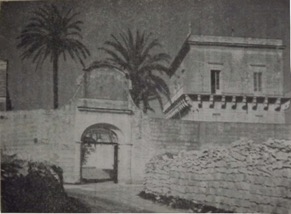 The legend narrates the story of the kidnapping of a girl from Mosta, who was in love and preparing to get married, and of the courageous nature of the Maltese, who have showed their mettle throughout the history of these islands. This legend is popular to this very day.

Towards the end of the fourteenth century, bands of armed pirates started criss-crossing the Mediterranean sea, with the intention of overwhelming and taking over the vessels of Christian owners.

These corsairs, as these sea pirates were known, used to form part of bands led by one commander. They took possession of goods on board the captured vessels, as well as all the people who were still alive after the battle. These unfortunate prisoners were dragged away and held captive as slaves.

The corsairs very often reached the land, and there they grabbed all that they considered useful to them, including as many people as possible, and carried them off to their waiting vessels.

Those taken slaves, belonging to rich families, were redeemed through the payment of a ransom, and their release depended on the payments of large sums of money.

The remaining unfortunate ones, whose families could not pay the required ransom, were sold into permanent slavery. These sea pirates often resorted to attacking Christian communities, who lived close to the shores of southern Europe.

Malta, situated on the sailing routes of their vessels, and the Maltese themselves being considered as enemies due to their Christian faith, was not spared from the great sufferings inflicted by these corsairs.

In order to be able to withstand such attacks, the Dejma or Watch was set up. This organisation was a military regiment composed of Maltese men as well as foreigners who lived in Malta.

All healthy males between the ages of sixteen and sixty five were obliged to join as soldiers in the Dejma. This military corps was made up of groups of between 600 and 800 men stationed in all the parishes existing at that time.

The summer and autumn months were the preferred periods for the pirates to attack these islands. Consequently, the sea shore was guarded day and night.

When the Maltese realised that the enemy vessels were approaching, they used to immediately signal the imminent danger to those inland by causing heavy clouds of smoke to rise during daytime, and by lighting bonfires during the night so that these could be seen in the dark.

As soon as these primitive signals were noticed, the bells of the churches were rung as further warning that the enemy was approaching.

In 1427, an army of 18,000 Mohammedans laid siege to Mdina, but they did not take it over and had to withdraw. Then again in 1481 the enemy tried to overcome the Maltese after landing at Marsaxlokk.

From there they proceeded to attack Vittoriosa and Gozo. If it can be said that thus far the people of Mosta had got off scot free, the same was not to happen in 1526 when there was an invasion the like of which has never been forgotten in Maltese history.

This time, the corsairs, who were under the command of Rajjes Sinen - one of the most outstanding pirates of that time - approached Malta’s coast during the night, and entered with their vessels up to the Salini, which is the port of Burmarrad.

In the reigning darkness they landed with great speed, and penetrated inland from the parts of Wied il-Ghasel until they reached the cliffs below Mosta.

The unfortunate people of Mosta had no idea what was coming to them when they took to their beds for the night. Like a flash, the pirates, behaving like starved lions, swooped on the village.

They resorted to destroying all that came in their way - looting, killing innocent people, tying up the unlucky Mosta residents and rushing others along with them back to the coast to take them as slaves.

After taking some 400 people as slaves, besides those killed and left behind, Rajjes Sinen ordered his men to retire quickly to Saint Paul’s Bay. There, the fleet of the corsairs was waiting for them and soon they were on their way to Barbary in North Africa, carrying with them the people and objects they had seized.

Back in Mosta, people felt orphaned of their loved ones and reduced to great poverty, whereas before it was one of the most beautiful villages of these islands.

Among the heart rending stories there was the one concerning a young girl, Marjanna, who was betrothed and was preparing to get married on the same day of the attack.

She too was taken away as a slave, together with the guests who were taking part in the wedding celebration. Tradition points to Torri Cumbo as the place where this tragedy took place.

This tower was the family home of Gulio Cumbo, who was a jurat - that is one of the most important persons on the island. The Cumbo family was one of the richest and most well placed in Malta in those days. Gulio’s daughter was in effect celebrating her wedding on the day of the invasion.

At one time, the Cumbos had with them a servant who was a Turk, by the name of Haggi Muley. This young man had fallen in love with Marjanna, but this love was not reciprocated as the girl was promised to another young man, Toni Manduca, who was a member of a neighbouring family.

When Haggi realised that Marjanna was marrying Toni, he took it very badly and fled from Malta and joined the pirates.

Some months after this escape, the day dawned when Marjanna was going to get married. The bride was a great beauty, and she looked even more beautiful dressed in white and wearing Maltese lace.

Marjanna was unlucky enough that when she was preparing for the wedding, the pirates carried out their plans with Mosta as their main target.

Haggi was one of the pirates who landed in Malta, and as soon as he left his vessel he rushed straight to the Cumbo Tower. He captured Marjanna and forced her to go with him to the vessel on which he had come to Malta.

After this tragedy, her fiancé and her family were heartbroken. They did all that was in their power to try and locate where she had been taken so that they could seek her freedom by paying a ransom.

Meanwhile, Marjanna had ended up at the harem of the Sultan Sidi Ali of Tripoli. Even though the Sultan refrained from hurting her, Marjanna was not at all happy at the way in which she had been taken away from her loved ones.

She was constantly weeping inconsolably, thinking of them and hoping that she would soon return to Malta to embrace her beloved Toni and her family again. Marjanna had such a sweet character that even Assen, the daughter of the Sultan, became her friend and loved her very much.

On his part, Toni could not find peace within himself. Though he was heartbroken, he devised a plan through which he hoped he would be able establish where Marjanna was being held captive and to proceed with freeing her.

Toni impersonated a cotton merchant and sailed to North Africa. After coming and going from one place to the other, he got to know that his beloved betrothed was being kept in the harem of Sultan Sidi Ali.

One day, when Toni was near the Sultan’s palace, he looked up at the windows high up in the walls and he heard a female familiar voice singing a sweet traditional Maltese song. He did not bother about the great danger in which he could find himself, and answered Marjanna by joining in her singing.

Assen, who had become very close to Marjanna, felt so much sorrow for her, and seeing that she could possibly reacquire her freedom, gave her support as best as she could.

Assen helped Marjanna to flee from the palace by bringing her clothing which would make her look like a corsair, and so the guards would be deceived and would not stop her when she left the palace gates.

Marjanna was finally able to hug her beloved fiancé Toni, and together they ran for their lives until they reached the port and boarded a Venetian vessel which was stopping in Malta on its way to Venice.

The two lovers arrived safely in their beloved island of Malta, and they not only joined their emotional families but soon they were also joined in matrimony.

This time their wedding was a happy one from beginning to the end, thus making up for all the sorrow they had gone through.

Reasons Why We Love Travelling, and Why We Are Missing It So Much

Story - "The Girl and the Giants"