Considered one of the greatest musical geniuses who ever lived, the 265th birthday of Mozart was commemorated on 27th January.

Several radio and television stations mentioned this in their news bulletins. Mozart’s death anniversary is marked every year, especially when it is a centennial, or every additional 50 years.

One local radio station had it that Mozart was born in Salzburg, Austria. Well, this is correct up to a point. Mozart was not Austrian, and when he was born in 1756 the city was not at all part of Austria.

He was German, his father Leopold (1719-87) was a Bavarian from Augsburg, and his mother Anna Maria (1720-78) was born in St. Gilgen in the Archbishopric of Salzburg.

By 1756, Salzburg had enjoyed virtual independence for many centuries under its long sequence of Prince-(Arch) Bishops. The territory become part of Austria in 1805, was ruled by Bavaria (1809-14) and then back to Austria ever since.

Leopold Mozart was a distinguished violinist and pedagogue, drawn to Salzburg, where he joined the court orchestra.

Salzburg’s rulers were renowned for their patronage of the arts, music included. In those days, musicians working for even the most benevolent of masters, and no matter how famous, were just glorified servants of their employers.

Anna Maria Pertl was the daughter of a lawyer and civil servant, known to have had considerable musical talent, and who fell on hard times. She was a sickly child, and was often ill for the rest of her life.

She married Leopold Mozart in 1747, and giving birth to seven children between 1748 and 1756 certainly did not help with her state of health.

After giving birth to a son and two daughters, all very short-lived, a daughter who survived was born in 1751, christened Maria Anna Walburga Ignatia, known in the family as Nannerl. A son and and daughter born after Nannerl both died when less than three months old.

"The youngest, christened Johann Chrysostom Wolfgang Theophilus, was to survive and awe the world, as he still does, with his incredible music".

The children were born in the family home at No. 9 Getreide Gasse, which still stands and of course now houses a Mozart museum. It has been probably visited by millions, maybe hardly a trickle now because of the current pandemic. 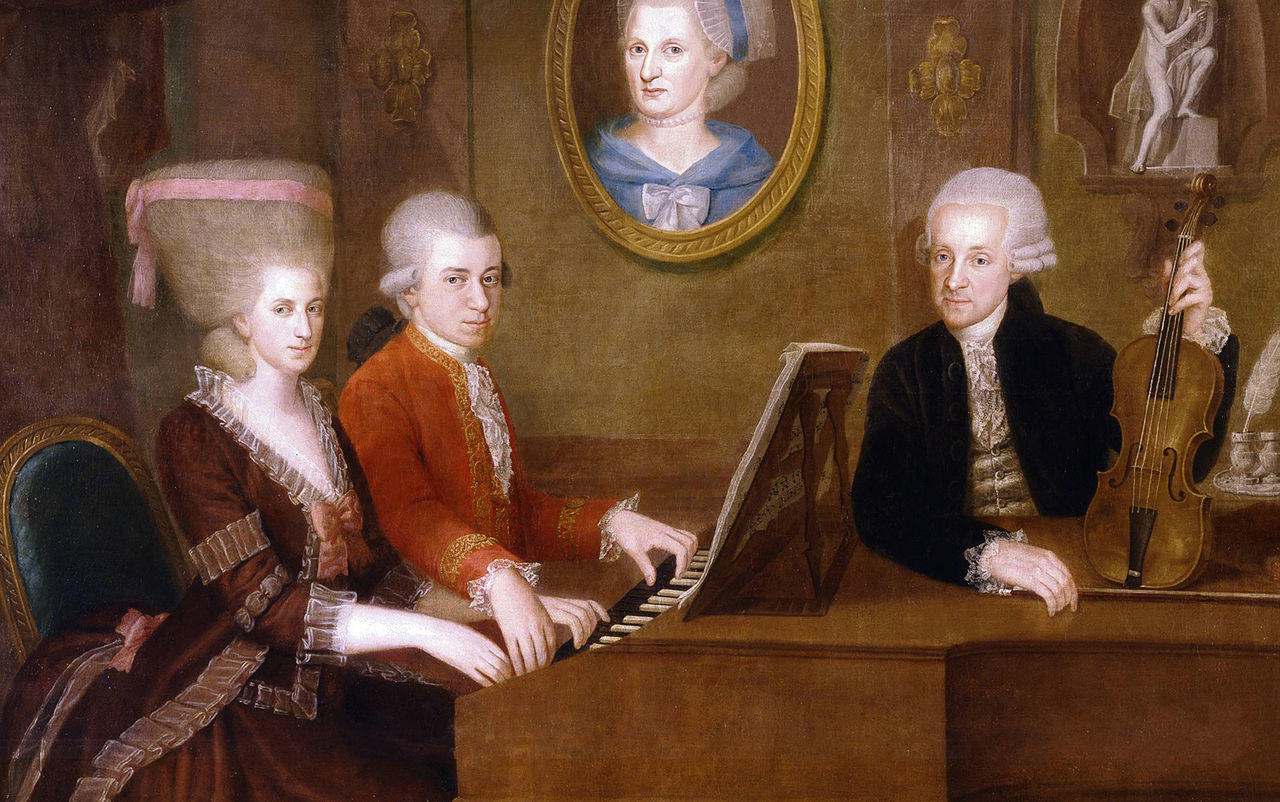 Wolfgang Amadeus Mozart with his sister Maria Anna and father Leopold, and a portrait of his deceased mother, Anna Maria

It was there in that modest abode that Leopold, who whenever he could gave private music lessons, became aware of Nannerl’s precocious musical abilities.

She became a very seriously committed pupil, quickly mastered the harpsichord, and was thus an example to her brother, five years her junior, who wanted to emulate her.

Wolfgang’s talent was prodigious both as a keyboard player and violinist, and of course when he started composing.

The children’s only teacher was their father, who amongst other things taught them languages, including Italian and French as well as academic subjects.

Italian cultural influence in Salzburg was very strong, and Mozart’s Italian was considered to be excellent.

This mastery of Italian can easily be seen from the very successful operas Mozart wrote in the language. This is especially remarkable in the famous Da Ponte Trilogy: Le Nozze di Figaro, Don Giovanni and Così Fan Tutte.