The exact date of Ludwig van Beethoven's birth is unknown. He was born in Bonn and his christening is documented on 17th December 1770. Bonn was in the territory of the electorate of Cologne, ruled by a Prince Archbishop, who was one of three such prelates who could vote in Imperial elections of the Holy Roman Empire.

Beethoven means “beet oven”, which indicates a peasant origin. However, Johann was a court musician, a rather mediocre singer at that, in the Elector of Cologne’s Court Orchestra. He owed his post more because Johann’s father Lodewijk (1712-73) was a highly respected singer and director at the Electoral Court.

Ludwig junior showed early musical talent, and his father was his first tutor. Johann saw in him a possible source of money and passed him off as younger than his real age.

When Ludwig was seven, his father organised the boy's first public appearance. He was passed off as six years old, but the event went unnoticed.

Johann was often furious at his son when, as he saw it, Ludwig did not study enough. He was often physically and psychologically abusive with the boy. The truth was that Josef was an alcoholic, a condition made worse when he lost his wife Maria Magdalena (1746-87).

Beethoven’s mother, weakened by the birth in 1786 of her seventh child and third daughter, died of tuberculosis in July. The baby followed a few months later in 1787.

Johann was now neglecting his children to such an extent that Ludwig was the only support the family had. Johann kept drinking away his salary, so Ludwig had to obtain a court order for half of his father’s pay to support the family.

As one can see, Beethoven had more than enough problems to contend with. His life was not an easy one, yet he grew to be one of the most important composers of Western music.

"Beethoven is seen as having bridged the span from the more formal classical style to the free and more Romantic emotional style".

Beethoven’s troubled adolescent years found some relief when he taught piano to the children of the widowed Hélène von Breuning (1750-1838). They remained close throughout their adult lives and Beethoven considered Helene as his dear second mother.

Ludwig left Bonn for Vienna, soon after which his father died. He studied composition with Haydn, whom he revered. Both Haydn and Mozart, whom he probably met on an earlier exploratory visit to Vienna in 1787, were an early influence.

That is until he forged ahead to create his own personal and unmistakable style and voice.

Tragedy struck Beethoven when as early as 1798 he became aware of hearing problems. He had also started his peripatetic existence in and around Vienna at various residences, but more of that to come later.

In 1800, with his hearing becoming increasingly defective, Beethoven was staying in Heiligenstadt, at that time a suburb of Vienna close to the countryside he loved so much.

He wrote a letter to one of his brothers saying that his deafness was an immense hurdle he could not face, and that he was seriously considered ending his life. Fortunately he did not, he felt the call of his mission too strongly.

Beethoven as a young man (image courtesy of www.classicfm.com)

While he was in such despair he was also working on his Second Symphony. Listen to this wonderful work as it bursts with joy and brightness.

"To me it is like a beacon of hope and an invitation not to give way to despair, because somehow a way out can be found".

Beethoven had other problems to contend with, one of them financial. Despite often having wealthy patrons, who mostly paid him handsomely for the work they commissioned from him, he was more often than not strapped for cash.

One increasingly heavy drain on his finances was supporting his brother Kaspar and his family, especially after the latter fell ill with tuberculosis.

Beethoven never approved of Kaspar’s wife Johanna, and when Kaspar died in 1815 and left his son Karl under the joint custody of Ludwig and Johanna, the composer tried to obtain exclusive custody of the then nine year-old boy. This was a costly litigation which lasted many years.

Beethoven often moved house. Vienna is littered with Beethovenhäuser. Most of them are visitable and are both within the city and in what had been suburbs in his lifetime.

When the composer was behind with the payment of his rent, he simply moved somewhere else. Within sight of the Ringstraße, opposite the University, there is the Pasqualati House, where he stayed for some time.

In the area behind the Votivkirche there is the Schwarzspanierhaus, a secularised former convent of a Spanish order whose monks wore a black habit. He rented a couple of rooms there during the last few months of his life.

In between, among many others he had lived in Heiligenstadt and Döbling. As I am a frequent visitor to Vienna I have visited more than a dozen such residences of the composer. 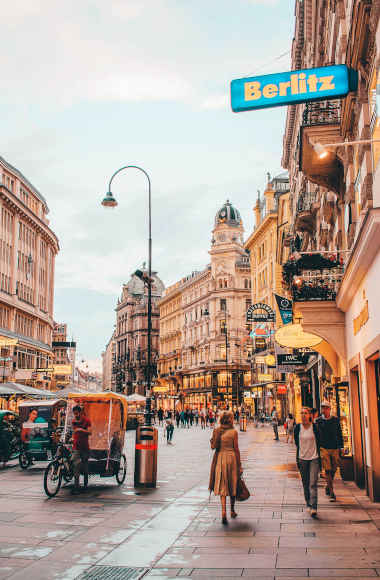 The city of Vienna, present day

Finance was not the only unstable element in his life. Beethoven never married, but he fell in love many times. In days when social differences were very strictly defined he tended to fall in love with the wrong women - from the aristocracy.

He moved in the aristocratic circles of his patrons, but crossing the line and establishing a romantic relationship was taboo.

Many names are mentioned, especially that of Theresa von Braunschweig. Many have tried to identify her with the unnamed “immortal beloved” he refers to in some of his letters, but we shall never know for certain who she was.

He remained a frustrated bachelor all his life, unable to marry and form a family, which is why the composer tried to lavish his paternal instinct upon his nephew. This was not so successful and led to the misery of them both.

"In other ways Beethoven’s music was like that of a firebrand and defender of human rights".

He stood up for his integrity as a composer and refused to be treated like a servant. That is, when composers, musicians, artists and actors were treated little better than such.

Things were changing and nobody would have dared kick him out, as Mozart literally had been by the Archbishop of Salzburg’s chamberlain. Neither did he ever wear a lackey’s uniform, because he was never in the service of any employer.

He had once admired Napoleon, and when the latter was First Consul, Beethoven dedicated his Symphony No. 3 (Eroica) to him. Before it could be premiered, Bonaparte proclaimed himself Emperor of the French and Beethoven angrily crossed out the original dedication, writing: “Dedicated to a great man”.

He considered this step as tyrannical and a betrayal of the Revolution’s better side (he was never anti monarchist). His only opera Fidelio is a cry against injustice and so is his powerful incidental music (Op. 83) to Goethe’s play Egmont, lauding Flemish resistance against Spanish tyranny.

It is impossible to refer to all the great works Beethoven left us. Up to about 1814/15 he was almost totally deaf, and completely after that.

The five piano concertos, the violin concerto, the Triple Concerto, the nine symphonies in the 6th of which, the Pastorale, he depicts his love of nature and optimism that peace and calm reign after a storm.

He was a pioneer. Having in his Choral Fantasia Op.80 experimented with soloists, chorus, piano and orchestra, he composed the first great symphony with an important part for soloists and choir in its last movement: the Ninth, Choral, inspired by Schiller’s An die Freude (Ode to Peace).

At its premiere in Vienna in 1824, Beethoven had not appeared in public for 12 years. He did not really conduct the premiere, but sat next to the conductor, Michael Umlauf, whose baton was followed by the orchestra.

"Beethoven was not aware of the standing ovation behind him so the alto solo, Caroline Unger, gently turned him round so he could see what was going on".

These last years were when he composed some of his most profound works, especially his late string quartets.

He left a great Mass in C Major, one oratorio Christ on the Mount of Olives, ballet music (the Creatures of Prometheus), 10 violin sonatas, one for horn and five for cello, 32 piano sonatas and other chamber works.

Beethoven may have been more often than not unkempt in his appearance, gruff in his behaviour, with a full head of ungroomed wildish hair, shortish and robust with a powerful gaze. He exuded greatness.

During my only visit to Bonn in the early 1990s I visited the house where he was born, and stood before the bust set on a pillar in one of the rooms, which made me realise he would have been considerably shorter than I am. 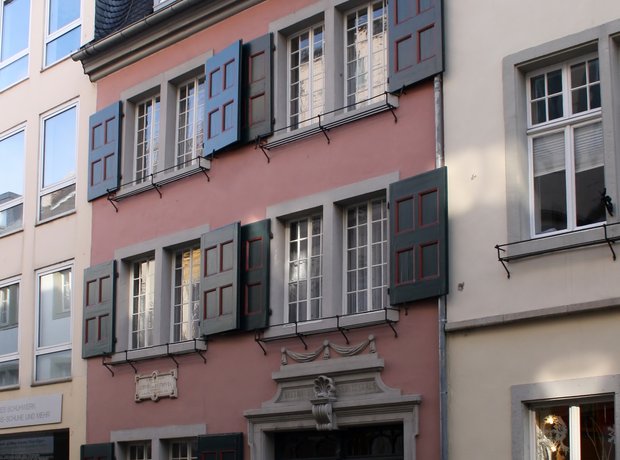 The house in Bonn where Beethoven was born (image courtesy of www.classicfm.com)

Beethoven died in his bedroom at the Schwarzspanierhaus on 26th March 1827, during a very heavy thunderstorm. An autopsy revealed considerable evidence of cirrhosis of the liver.

His funeral was held on 29th March. One of the torch bearers was the sickly Schubert, a great admirer of his, and who was to die of typhus 20 months later. A religious service was held in the church at the bottom of Alserstraße, not far from the Votivkirche.

At first Beethoven was buried in the cemetery of Währing in Vienna. Some decades later, when Vienna’s Zentralfriedhof was built, his remains were transferred to the composer’s corner of that vast cemetery, which sprawls outside Vienna on the way to Schwechat airport. 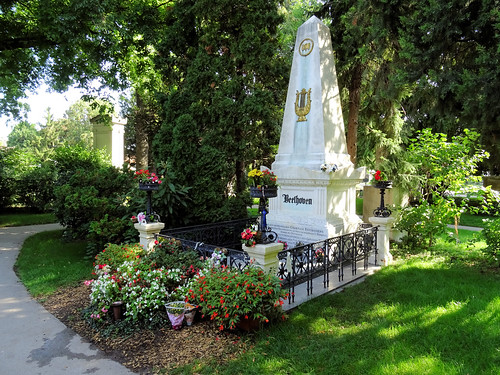 Beethoven's monument and tomb in the Zentralfriedhof (Central Cemetery) outside Vienna (image courtesy of www.visitingvienna.com)

I don’t know why I kept postponing a visit to the grave, but I finally did on my fifteenth visit to Vienna in the late summer of 1976.

"When I got there I felt my knees giving way, a wave of emotion overtook me, and I knelt in homage to the great man".

Beethoven is a beacon of hope, an inspirational genius whose works make one think of superior forces.